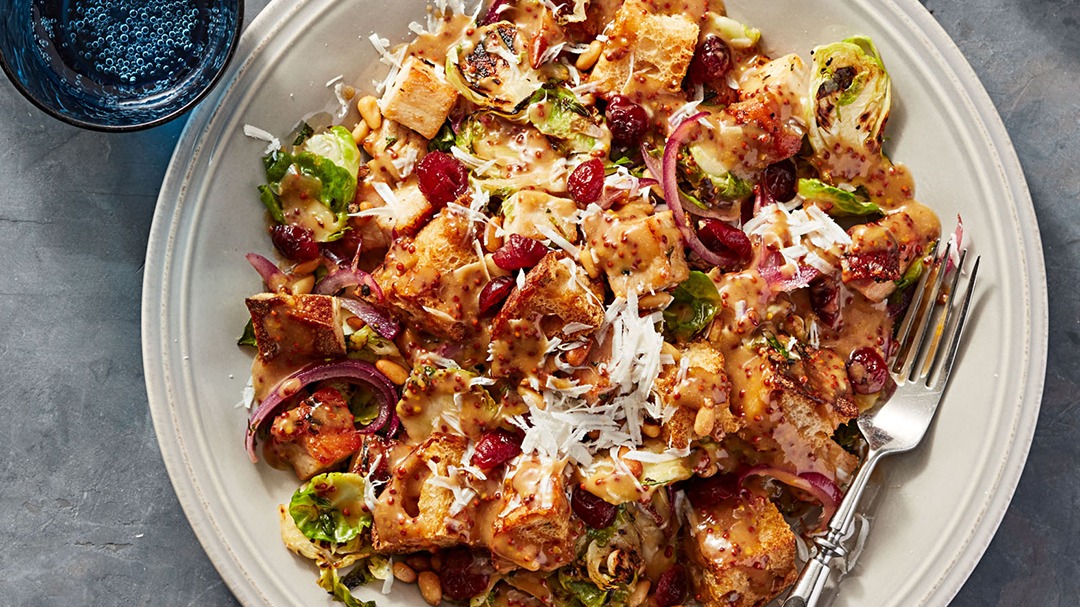 Preheat the oven to 350°. On a small rimmed baking sheet, arrange the bread in a single layer. Sprinkle with the poultry seasoning. Bake, stirring once, until golden, about 15 minutes.

In a large skillet, heat 2 tbsp. olive oil, two turns of the pan, over medium-high. Add the turkey. Cook, stirring often, until browned, 3 to 5 minutes; season with salt and pepper. Add the thyme. Transfer to a bowl. In the same skillet, heat the remaining 1 tbsp. olive oil, one turn of the pan. Add the Brussels sprouts, onion, garlic, and sage; season. Stir in the nutmeg. Cook, tossing often, until the vegetables are crisp-tender, 6 to 7 minutes. Transfer to a large bowl. Mix in the bread, turkey, and cranberries.

In a medium bowl, whisk the vinegar, Dijon, and maple syrup. Gradually whisk in the EVOO. Drizzle over the panzanella; season. Toss until coated. Serve on a platter or in shallow bowls. Top with the cheese and nuts.

Cheese Comfort Food Pasta Rachael Ray In ... Soups and Stews Winter
Much quicker and lighter than regular lasagna, this soup is a tasty supper for any...
Check Out Our New Arrivals!