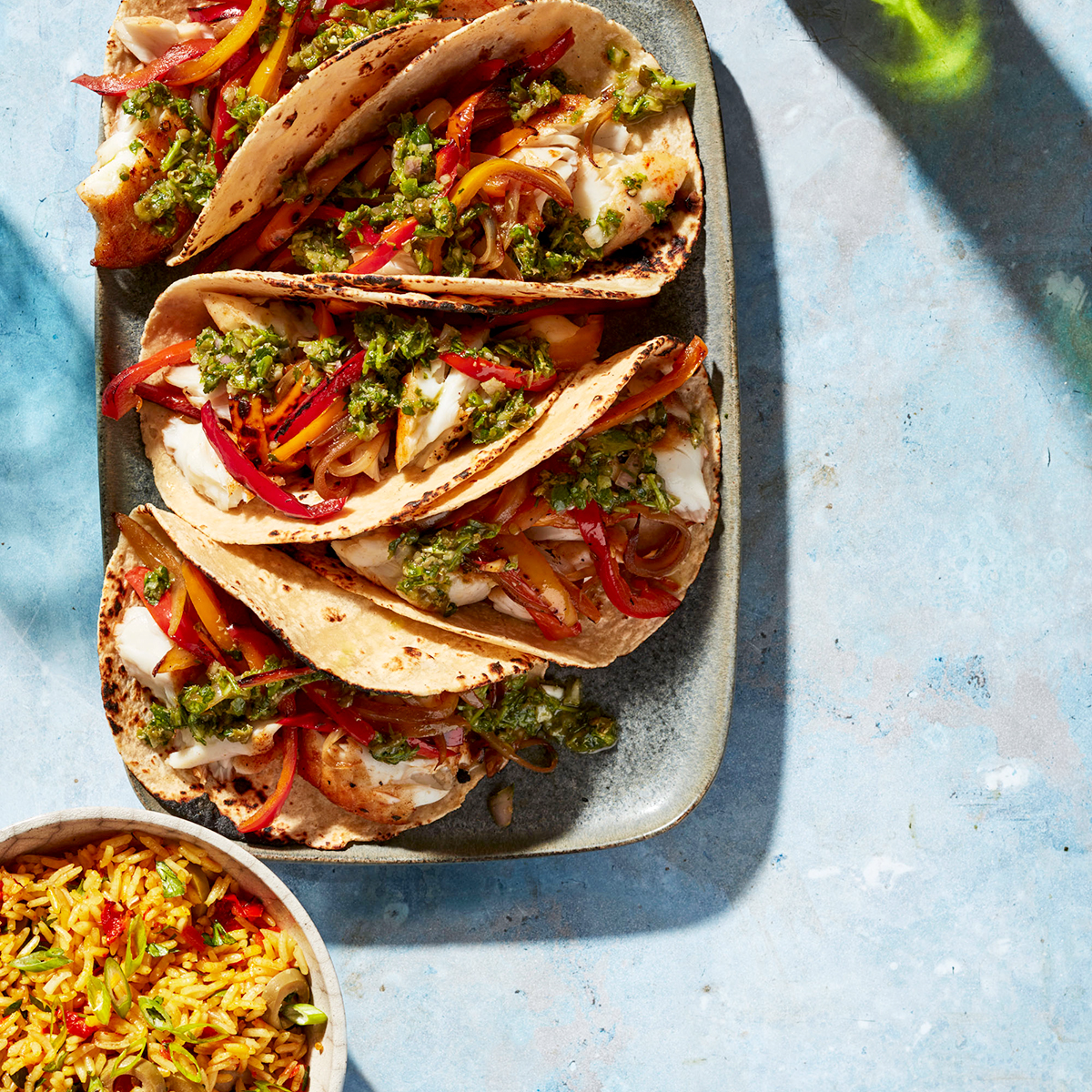 Tilapia Fajitas with Chimichurri and Saffron Rice with Olives

Season the fish on both sides with salt. Let stand for about 10 minutes. Pat the fish dry; season with paprika and pepper. Halve the fillets lengthwise. Put the thinner halves in one pile and the thicker ones in another.

In a large saucepan or skillet with a lid, heat 2 tbsp. butter over medium to medium-high. When it foams, stir in a third of the garlic. Add the piquillo peppers and scallion whites; season with salt and pepper. Cook, stirring often, until the scallions soften, 2 to 3 minutes. Add the rice and stir until toasted, about 1 minute more. Stir in the saffron. Add the stock. Bring to a boil. Cover the rice and reduce heat to a simmer. Cook until the rice is almost tender, about 15 minutes. Remove from heat. Add the olives and the handful of parsley. Let stand for 5 minutes. Fluff the rice with a fork.

In a food processor, pulse 1 cup each parsley and cilantro, the EVOO, half the lemon juice, the shallot, chile, capers, and vinegar until finely chopped. Transfer the chimichurri to a small bowl

Add the remaining 2 tbsp. olive oil, two turns of the pan, to the skillet. Increase heat to high. Add the onion and mini peppers. Cook, tossing often, until the vegetables are crisp-tender and the edges begin to brown. Add the remaining garlic; season with salt and pepper. Add about 1/4 cup water and stir the vegetables, scraping the bottom of the pan with a wooden spoon to release the browned bits.

Working over an open flame on a gas stovetop or in a stainless steel or cast-iron skillet (heated over high), cook the tortillas until charred, about 30 seconds per side.

Baked Dinner Fish and Seafood One-Pan Meals Potato Rachael Ray In ... Valentine's Day
Not only can fish pair with red wine, it's good cooked with red, too.
Check Out Our New Arrivals!