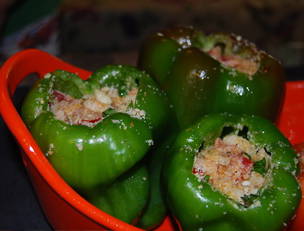 You can stuff any color bell pepper and any kind of large tomato, but beefsteaks work the best.

Core and rinse out the bell peppers. Core the tomatoes and scoop out the insides. Chop the tomato insides and throw them into a medium size bowl. Chop the onion and garlic and add to the bowl with the tomatoes, along with the cheese and the breadcrumbs. Chop up the parsley and basil and add them to the same bowl. Mix everything together and season with black pepper.

Spray a roasting dish, such as Rachael's Bubble and Brown dish, with cooking spray, or rub with EVOO. Fill the peppers and tomatoes with the stuffing mixture and arrange them in the baking dish so that they are standing up. If they are going to topple over, you could add a few loose plum tomatoes around the stuffed veggies so that they stay upright.

Drizzle everything with a generous amount of EVOO. Place in the oven and bake, uncovered, until lightly browned, about 40 minutes. Remove from the heat and allow to cool before serving, but serve warm.