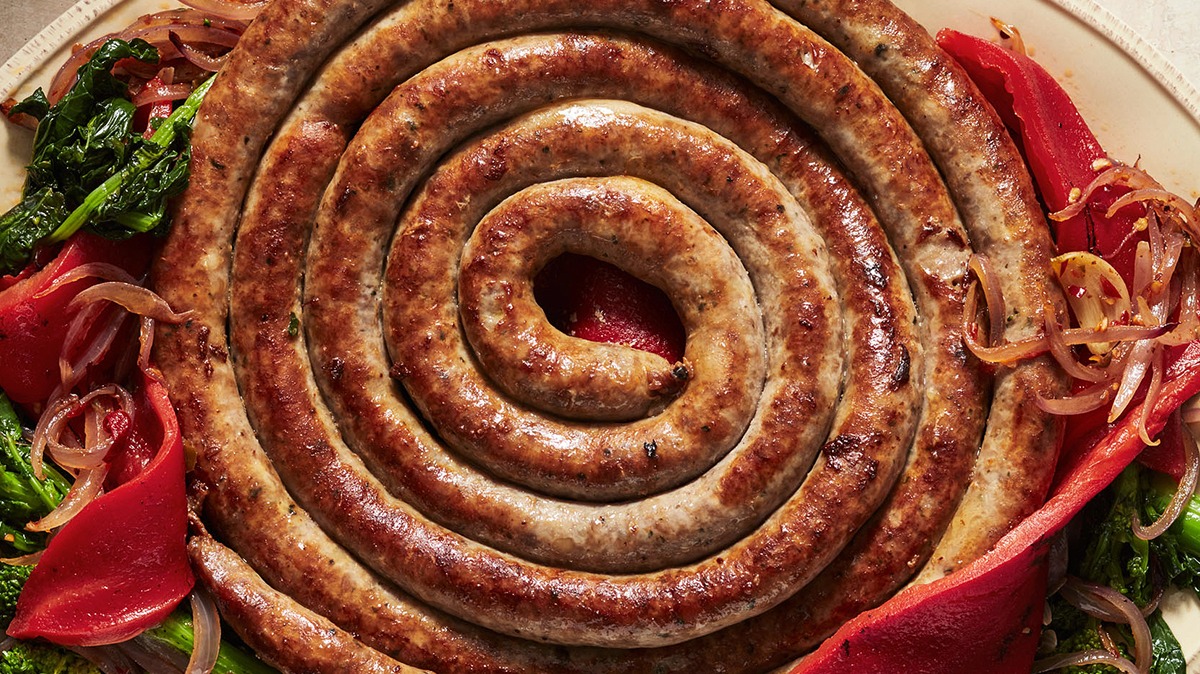 I rarely order broccoli rabe in a restaurant because it's often cooked to death. This is how rabe rolls: Short-parboil it (to remove some bitterness.) Then dry it and toss in a skillet with some strong flavors, like chiles and garlic, to balance it out.

Preheat the broiler to high or turn a stovetop gas burner to high. Char the peppers, turning occasionally, until blackened all over, 10 to 12 minutes. Place in a bowl and cover with plastic wrap. Let rest until cool enough to handle, about 10 minutes.

Meanwhile, in a large deep skillet, bring a few inches of water to a boil. Prepare a large bowl of ice water. Salt the boiling water and add the broccoli rabe. Cook until crisp-tender, about 3 minutes. Drain and add to the ice water. Let cool. Drain, then spread out the broccoli rabe on a kitchen towel to dry. Wipe out and reserve the skillet.

Nest the rope sausage in another skillet. Add a thin layer of water (about 1/8 inch). Add 1 tbsp. oil, one turn of the pan. Using a fork, pierce the sausage casing a few times. Bring the water to a boil over high. Reduce heat to medium-high. Cook until the water evaporates, about 5 minutes. Continue cooking the sausage, carefully turning once, until cooked through, browned, and crisp, about 16 minutes.

Meanwhile, in the first skillet, heat the remaining 4 tbsp. oil, four turns of the pan, over medium to medium-high. Add the onion, garlic, and chile paste. Cook, stirring often, until softened, about 3 minutes. Add the wine. Cook until reduced by half, 1 to 2 minutes. Add the broccoli rabe and cook, tossing to coat, until heated through, 3 to 4 minutes. Season with salt.

Arrange the broccoli rabe on a platter. Tuck in the peppers. Top with the sausage.