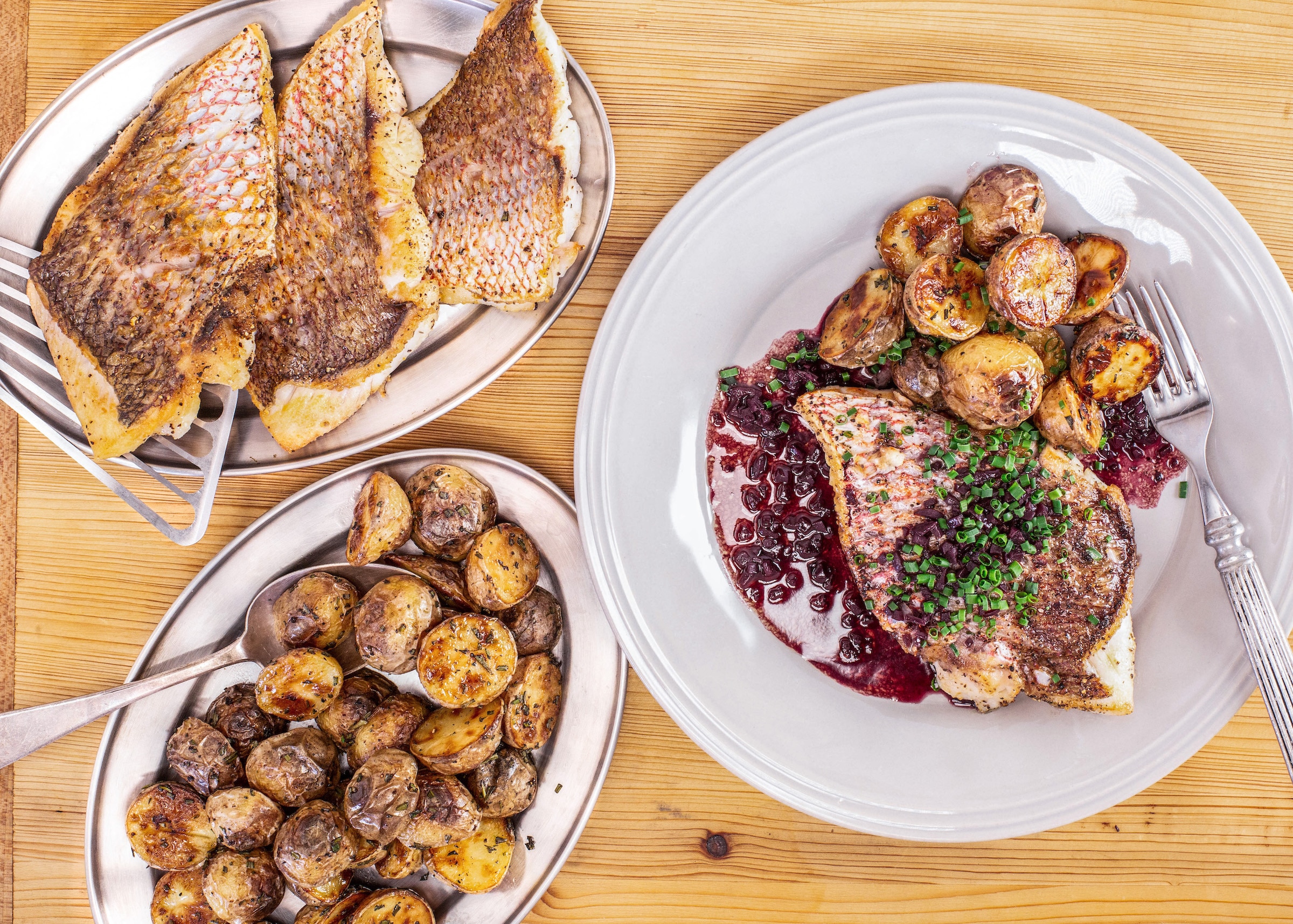 "Not only can fish pair with red wine," Rach says, "it's good cooked with red, too."

For the potatoes, place a rack in the center of the oven; preheat to 550°F (or as high as your oven will go.) Alternatively, preheat the broiler.

Place the potatoes in a large saucepan. Add enough cold water to cover the potatoes. Bring to a boil over high heat. Salt the water and cook the potatoes until just tender on the outside but not quite cooked through, about 8 minutes. Drain the potatoes.

Meanwhile, line a rimmed baking sheet with parchment paper. In a large skillet, heat the oil, about two turns of the pan, over medium. Add the butter and garlic. Cook, stirring often, until fragrant, 2 to 3 minutes. Add the potatoes and toss until coated. Arrange the potatoes, cut-side up, on the baking sheet; season with salt, pepper, and the rosemary. Roast or broil the potatoes until crisp, 10 to 12 minutes.

For the sauce, in a saucepan, heat the oil, one turn of the pan, over medium-high. Add the shallot, garlic, and bay leaf; season with salt and pepper. Stir until softened, about two minutes. Add the wine and stock. Boil over high heat until reduced to ½ to 1/3 cup, about 15 minutes. Whisk in the butter. Remove from heat. Discard the bay leaf.

While the sauce is reducing, make the fish: Heat a large cast-iron or nonstick skillet over medium-high. Season the fish with salt and pepper. Add the oil, about two turns of the pan, to the skillet. Add the fish, skin side down. Cook, pressing the fish with a spatula, until the skin is flat and crisp, 4 to 5 minutes. Turn the fish and cook until just opaque in the center, about 2 minutes more. Transfer to plates or a platter.

Spoon the red wine sauce over the fish. Top with chives. Serve with the potatoes.

Burgers Vegetarian
This recipe originally appeared on the Rachael Ray Show. For more recipes and videos from the...

dinner lunch pasta The Rachael Ray... Vegetarian
This recipe originally appeared on the Rachael Ray Show. For more recipes and videos from...

Fruit Pork
This recipe originally appeared on the Rachael Ray Show. For more recipes and videos from the...
Check Out Our New Arrivals!