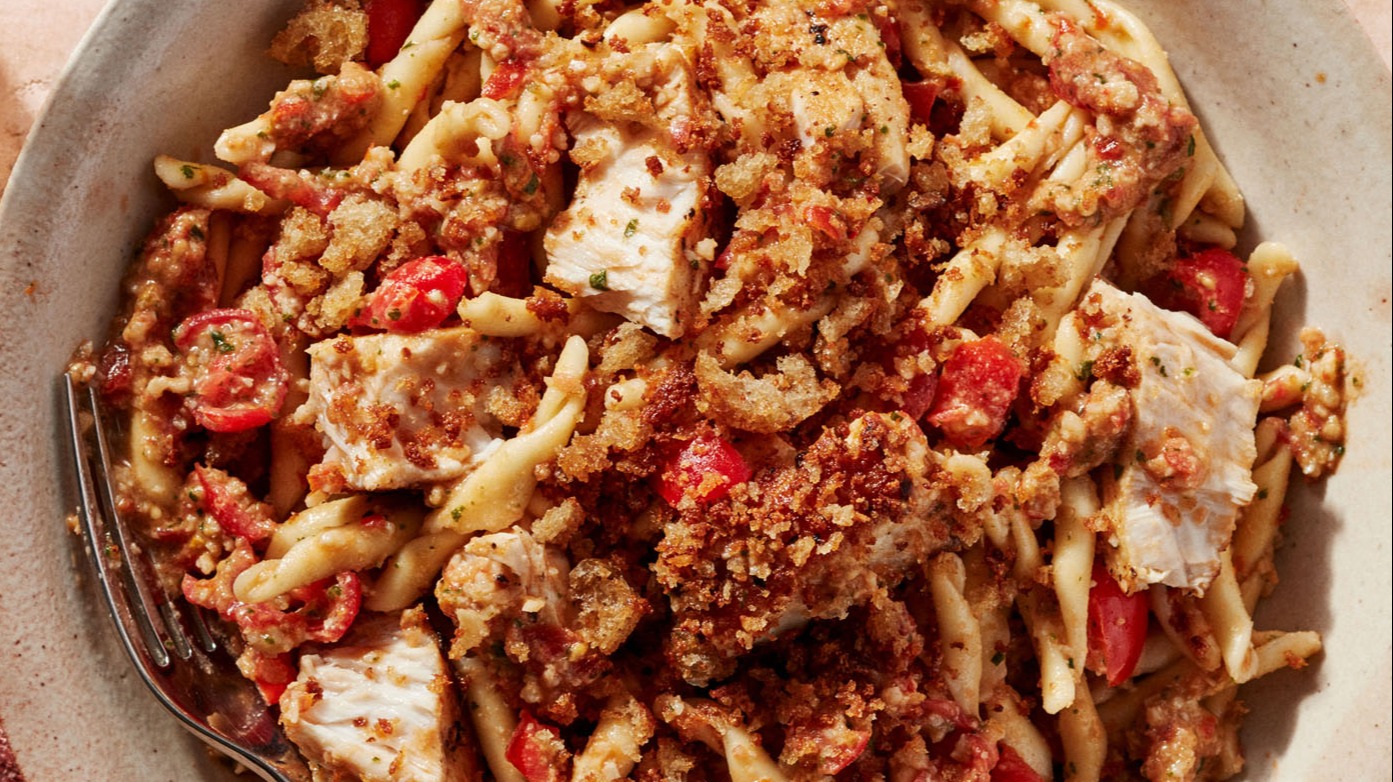 Pasta with Trapanese Sauce And Swordfish

In a food processor, pulse the bread into large crumbs, about 30 seconds.

In a skillet, heat 2 tbsp. oil, two turns of pan, over medium to medium-high. Add the butter. When it foams, add the anchovies. Cook, stirring often and breaking up the anchovies with a spoon, until they melt into the butter and oil. Add the breadcrumbs; toss until coated. Cook, tossing often, until the breadcrumbs are toasted and browned, 4 to 5 minutes. Transfer to a plate. Wipe out the skillet. Return the processor bowl to the food processor.

Heat a cast-iron skillet, griddle, or grill pan over medium-high to high.

In the same skillet you used for the breadcrumbs, cook the nuts over medium heat, stirring often, until golden brown, 3 to 4 minutes. Transfer to the food processor. Add the garlic and 1 scant tbsp. salt; pulse until finely chopped, 5 to 6 pulses. Add half the tomatoes and all the basil; process until finely chopped, about 30 seconds. Add the remaining tomatoes and about 3 tbsp. oil; pulse until the tomatoes are coarsely chopped, 5 to 6 pulses. Transfer to a large shallow bowl. Season the sauce with a little crushed red pepper.

Salt the boiling water and add the pasta. Cook until 1 minute shy of the package directions. Scoop out 3/4 cup of the cooking water and drain the pasta.

Add the remaining 2 tbsp. oil, two turns of the pan, to the skillet. Season the fish with salt and pepper; cook until browned on the outside and opaque in the center, about 2 minutes per side. Drizzle with the lemon juice. Transfer to a plate. Break up the fish into bite-size pieces.

Toss the pasta with the sauce. Add the cooking water as needed if the pasta seems dry. Fold in the fish. Serve the pasta in shallow bowls and top with the breadcrumbs.

Comfort Food Dinner Lamb One-Pan Meals Pasta Quick + Easy Rachael Ray In ...
Instead of the traditional tomato ragu, this one is made with stock and milk.

Cheese Chicken Dinner Pasta Quick + Easy Rachael Ray In ... Vegetables
My sister Maria's birthday is in March. This dish might be her birthday meal.
Check Out Our New Arrivals!