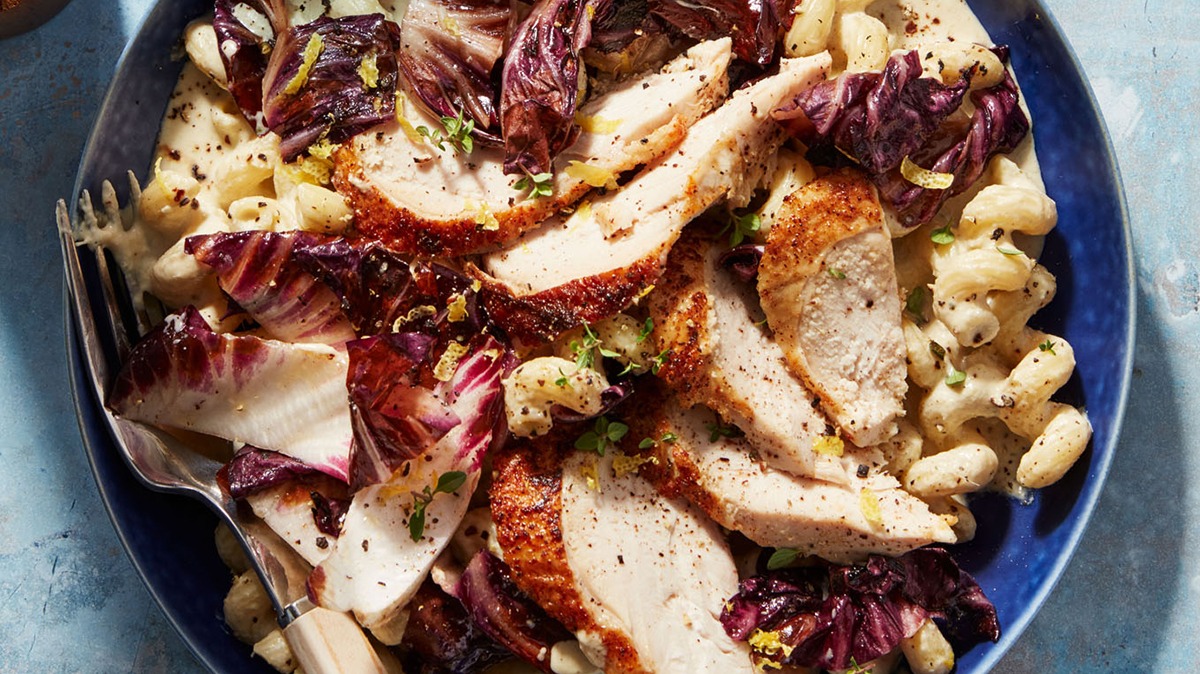 My sister Maria's birthday is in March. This dish might be her birthday meal.

Preheat the broiler to high.

In a large skillet, heat the oil, two turns of the pan, over medium to medium-high. Add the garlic and stir until aromatic, about 1 minute. Add the artichokes, thyme, and lemon zest; season with salt and pepper. Cook, stirring occasionally, until lightly browned, 3 to 4 minutes. Add the cream. Cook over medium heat, stirring occasionally, until slightly reduced, about 10 minutes. Transfer to a food processor or high-power blender. Add the ricotta and Parm. Process until smooth. Return the sauce to the pan and keep warm over low heat.

In a small skillet, heat the chicken in the stock until heated through, 3 to 5 minutes.

On a broiler pan or baking sheet, arrange the radicchio in a single layer. Spray with cooking spray and season. Broil until slightly wilted and charred at the edges, 5 to 6 minutes. Coarsely chop the radicchio.

Meanwhile, salt the boiling water and add the pasta. Cook until al dente. Reserve about 1/2 cup of the starchy cooking water. Drain the pasta.

Divide the pasta among shallow bowls. Top with the chicken and radicchio.

Burger of the Month: Turkey Cheeseburgers...

Rachael Ray Mag...
Hey, Pilgrim! For Thanksgiving flavors any time of year, try this burger on for size....

Rachael Ray Mag...
"You know how I love a chicken cutlet! This one has a breading that’s bumped...

Chicken and Orzo Soup with Peas,...

Rachael Ray Mag...
"Talk about a spring fling! This recipe shows just how much you can jazz up...
Check Out Our New Arrivals!