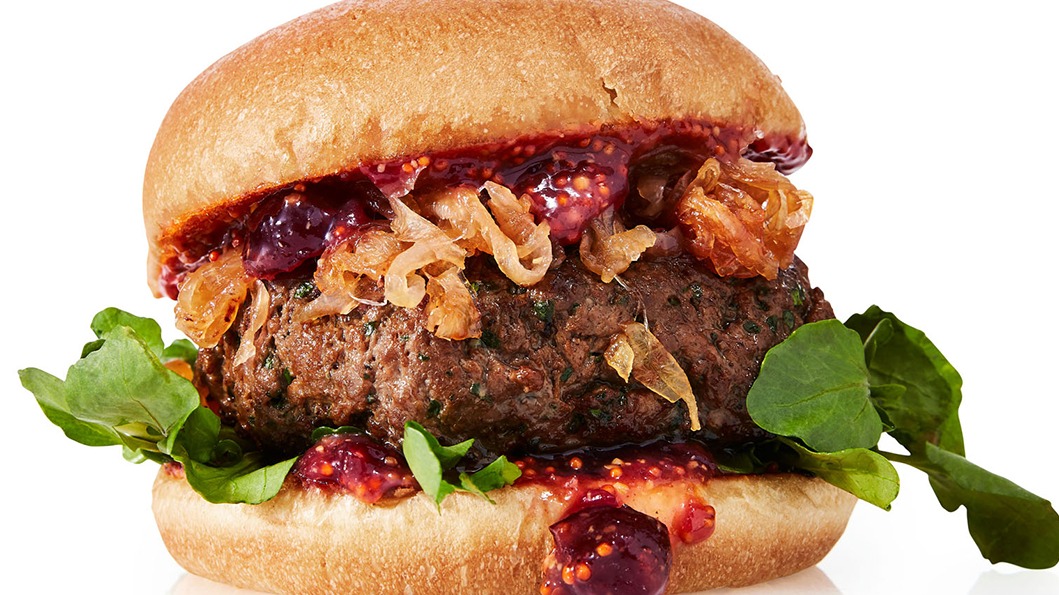 This is my first stab at a “Christmas burger”—a patty with red and green fixings. It’s decidedly different. I don’t know if it makes the Naughty or Nice List, but for me, it makes the Tasty List!

In a medium skillet, melt the butter over medium heat. When the butter foams, add the onions and bay leaf. Season with salt and white pepper. Cook, stirring often, until softened, about 15 minutes. Add 1/2 cup water. Cook until the water is absorbed and the onions are golden brown, 20 to 30 minutes. Add the sherry. Cook, stirring often, until absorbed, about 3 minutes. Discard the bay leaf.

In a medium bowl, season the beef liberally with kosher salt and black pepper. Mix in the parsley and Worcestershire. Form the meat into 4 portions. Press 1 disk of blue cheese into the center of each; fold over the meat to seal the cheese. Form into patties (thinner in the centers for even cooking). Place the patties on a plate. Cover and refrigerate until firm, 10 to 15 minutes.

In a small saucepan, heat the cranberry sauce and 2 tbsp. water over low, stirring until loosened, about 2 minutes. Transfer to a small bowl. Mix in the mustard.

In a cast-iron skillet or other heavy skillet, heat the oil, one turn of the pan, over medium-high. Add the patties. Cook, turning occasionally, for 8 to 9 minutes.

Build the burgers with the bun bottoms, some cran-mustard sauce, the upland cress, patties, onions, more cran-mustardsauce, and the bun tops.

Fish and Seafood One-Pan Meals Pasta Salads Spring
Savor the flavors of spinach and artichokes tossed with cheese tortellini, tuna and a lemon...