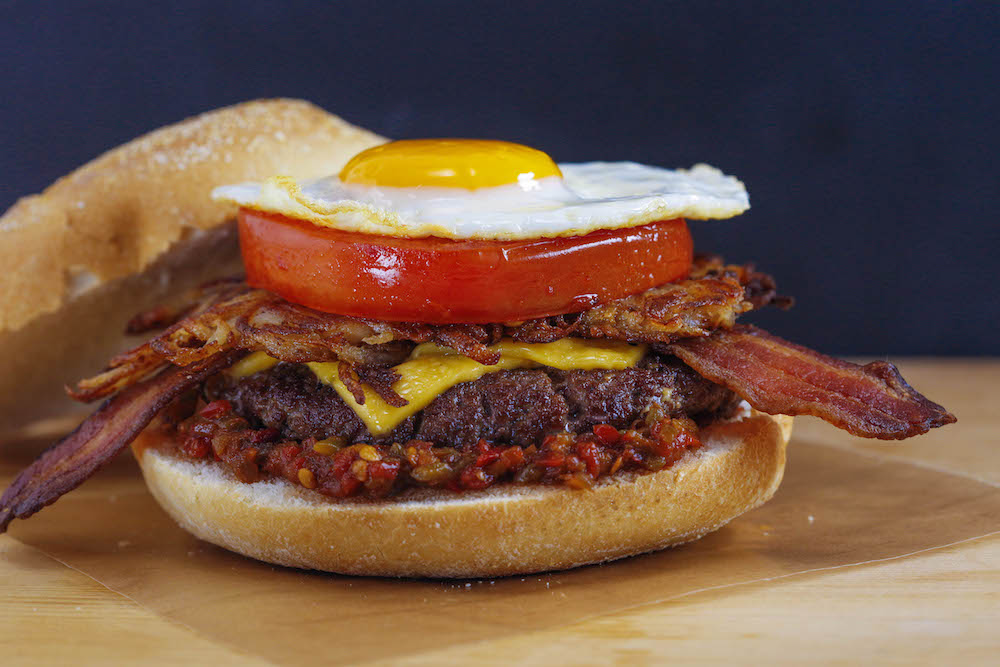 Bacon, Egg and Cheeseburger on a Roll with Spicy Mustard Hash Browns

Arrange bacon on a slotted broiler pan or wire rack set on a rimmed baking sheet. Bake the bacon until very crisp then remove from oven and reserve. Reduce oven temp to 275°F.

Using a cheese grater, grate the potatoes onto a kitchen towel. Wring the towel over the sink to squeeze out all of the potato liquid. Put the grated potato into a bowl and add the mustard; season liberally with salt and pepper.

In a large skillet, heat about 1/8 inch of oil over medium-high heat. Once hot, spoon 4 mounds of potatoes into pan then flatten them out into hash brown cakes. Cook until brown and crisp on both sides. Transfer to a rack-lined baking sheet and keep hot in oven.

Season meat with Kosher salt and pepper, and form 4 large patties that are thinner at center for even cooking.

Heat a cast-iron skillet or griddle pan over medium-high heat. Add a little canola oil and wipe pan with paper towel to distribute it evenly. Cook patties 8 minutes, turning occasionally. Melt 2 slices of cheese on each burger; remove burgers from pan to a plate.

Heat a nonstick skillet over medium heat, add a thin pat of butter and melt. Fry eggs to medium. If using sliced tomatoes, sear them for a minute over medium-high heat after removing the eggs from the pan.

To build cheeseburgers, place cheeseburger patties on bun bottoms, then a hash brown patty, some bacon, an egg and the bun tops. (I add hoagie spread to bottom of roll and sliced tomato on top of egg.)

Cheese Comfort Food Pasta Rachael Ray In ... Soups and Stews Winter
Much quicker and lighter than regular lasagna, this soup is a tasty supper for any...
Check Out Our New Arrivals!