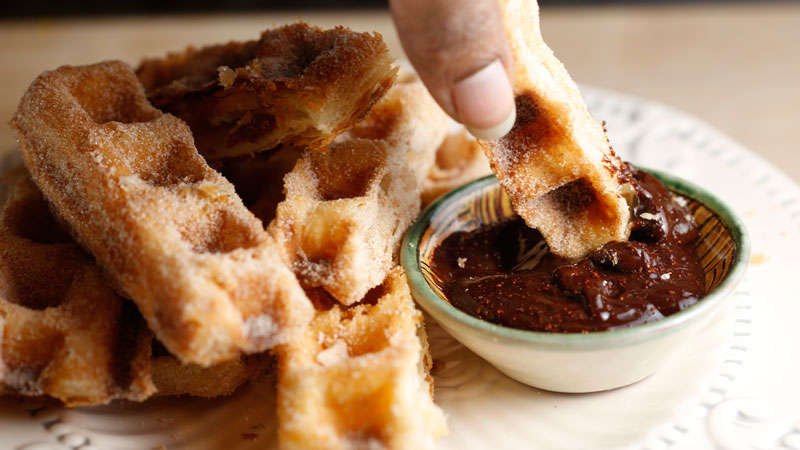 Dust a work surface with a little bit of flour. With a rolling pin, roll out each puff pastry sheet just a little bit to smooth the surface. Cut the puff pastry into quarters that fit into each section of your waffle maker.

Place puff pastry in the waffle maker and cook for about 5 minutes or until crisp. Repeat with the rest of the puff pastry.

While the puff pastry cooks, make the cinnamon sugar. In a large bowl, toss sugar with 1 teaspoon of cinnamon.

When the waffles are done, remove them from the waffle maker and, while they’re still hot, place them one by one into the cinnamon sugar and toss to coat. Cut each waffle into 4 strips to resemble mini churros.

To make the chocolate dipper, heat the cream in a small saucepan over medium-high heat until hot, but not boiling. Whisk in the chocolate chips. Season with the remaining cinnamon, ancho chili powder and salt.

Serve churros with chocolate sauce alongside for dipping.

Chicken Lunch Salads
Why buy lunch kits at the store when you can pack up this healthy chicken...

Spinach Salad with Strawberries and Basil

30 Minute Meals Lunch No-cook Salads Sides Vegetables
Fast and light, this salad will complement a variety of dishes.
Check Out Our New Arrivals!