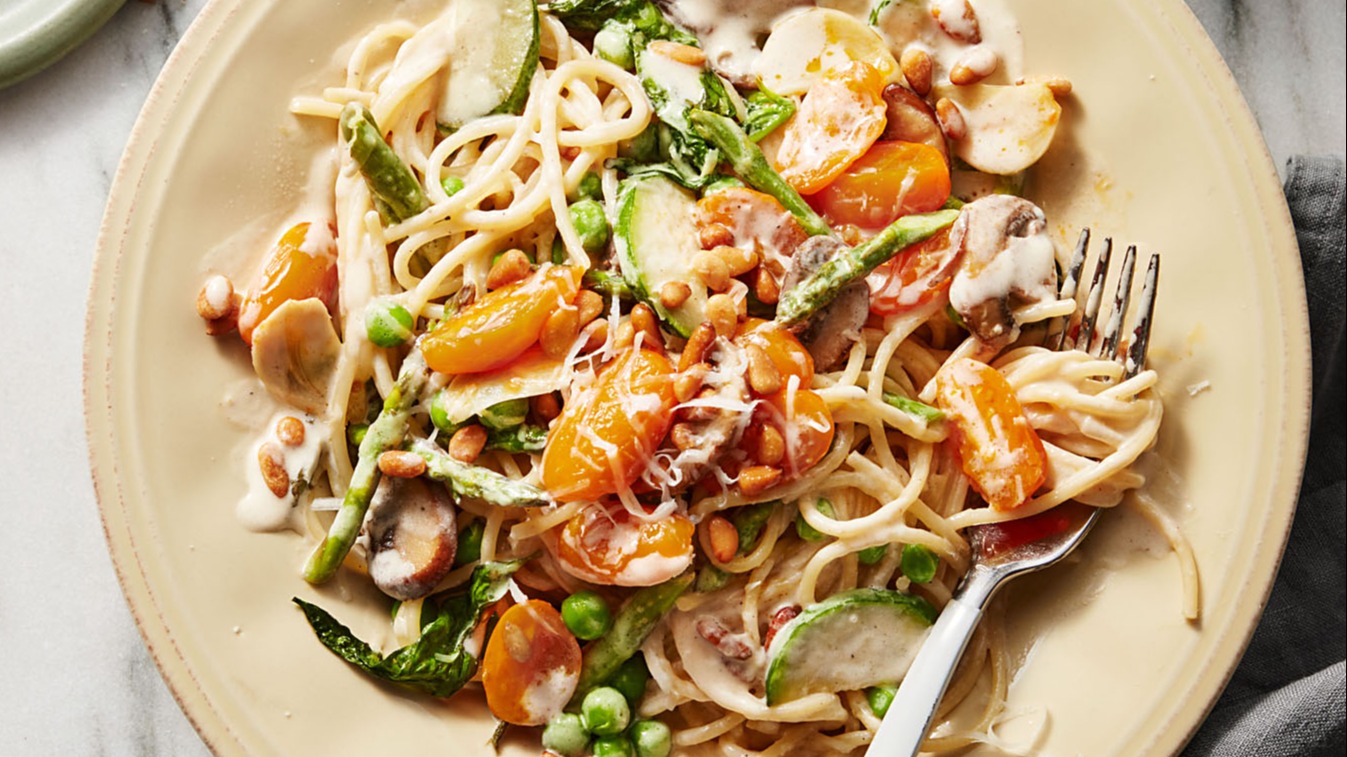 In a large skillet, heat 2 tbsp. oil, two turns of the pan, over medium-high. Add the butter. When it foams, add the mushrooms and cook, stirring often, until lightly browned, about 5 minutes. Add the asparagus, leek, zucchini, and peas; season with salt and pepper. Cook, tossing often, until the zucchini and asparagus are crisp-tender, about 4 minutes. Add the wine and stir until absorbed, about 2 minutes. Stir in the cream. Reduce heat to low. Season the sauce with a little nutmeg and white pepper. Let the sauce gently simmer until slightly reduced and thickened, about 3 minutes.

Salt the boiling water and add the pasta. Cook until 1 minute shy of the package directions. Scoop out half a cup of the starchy cooking water, then drain the pasta.

In a medium skillet, stir the pine nuts over medium heat until toasted, about 4 minutes. Transfer to a plate and let cool. Increase heat to medium-high. Add 2 tbsp. oil to the skillet, two turns of the pan. Add the tomatoes and garlic; season with salt. Cook, tossing often, until the tomatoes release their juices, about 2 minutes. Add the basil; stir just until wilted, about 1 minute. Remove the skillet from heat.

Toss the pasta, cooking water, and half the Parm with the sauce. Transfer to shallow bowls or a large serving bowl. Top with the tomatoes, pine nuts, and remaining Parm.

Chicken Spring
This recipe originally appeared on the Rachael Ray Show. For more recipes and videos from...

Pasta Pork Spring
This recipe originally appeared on the Rachael Ray Show. For more recipes and videos from the...

Baked Pastas Spring
This recipe originally appeared on the Rachael Ray Show. For more recipes and videos from...
Check Out Our New Arrivals!