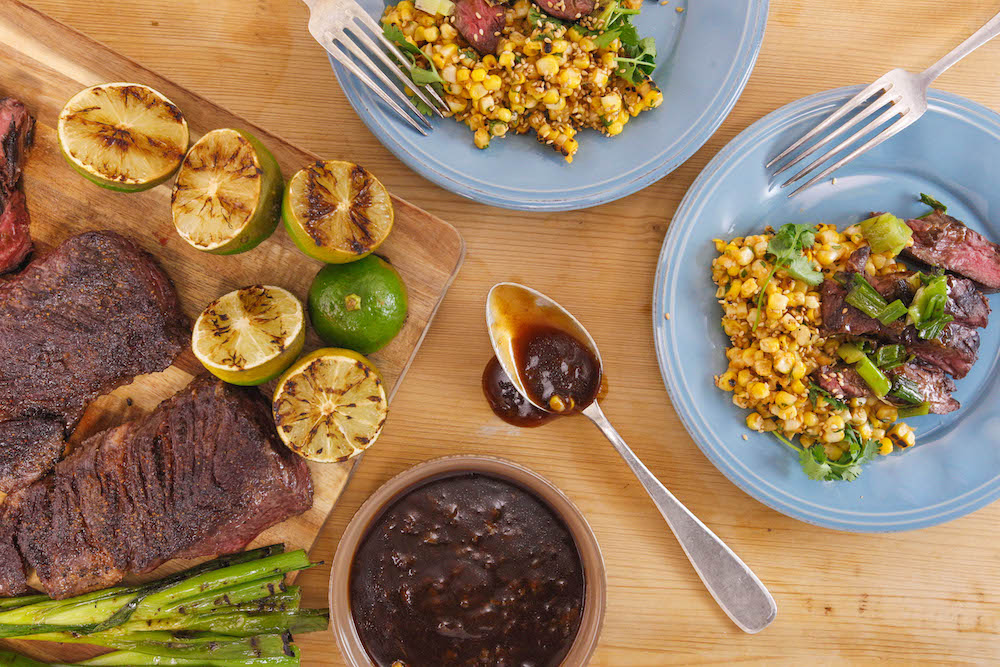 Bring meat to room temperature then season both sides with salt and pepper. Heat a grill or grill pan over medium-high.

In a small saucepan, heat 1 tablespoon oil, one turn of the pan, over medium heat. Add the ginger and garlic, and cook, occasionally swirling the pan, until aromatic, about 2 minutes. Stir in 1/2 cup water, the hoisin, lime juice, honey, tamari and Worcestershire. Reduce the heat to low and let the sauce simmer until thickened slightly, about 5 minutes.

Grill the steak, turning occasionally, for 10-12 minutes. Grill the halved lime cut-side down, until charred, about 2 minutes. Remove steak from the grill and squeeze lime over the steak. Let the steak rest 10 minutes then slice against the grain.

Meanwhile, douse the corn in water, drizzle with oil, throw it on the grill and cook, turning occasionally, until charred in spots, 8-10 minutes. Cut corn off the cob and place into a serving bowl.

In a small saucepan, melt the butter with the Sriracha over medium heat. Stir in the sesame oil and remove from the heat. Pour the butter into the bowl with the corn and stir. Garnish with the scallions and sesame seeds.

Transfer cut steak to plates and pour the sauce over. Serve with corn alongside.

Rachael Ray Mag...
Mussels are a very affordable seafood option and they cook really quickly. Once you add...

Rachael Ray Mag...
This is a smoky, sexy, spicy update on a favorite dish: pasta with vodka cream...

Rachael Ray Mag...
"My mom came up with pancetta-wrapped prawns decades ago, and it was the first 30-minute...
Check Out Our New Arrivals!