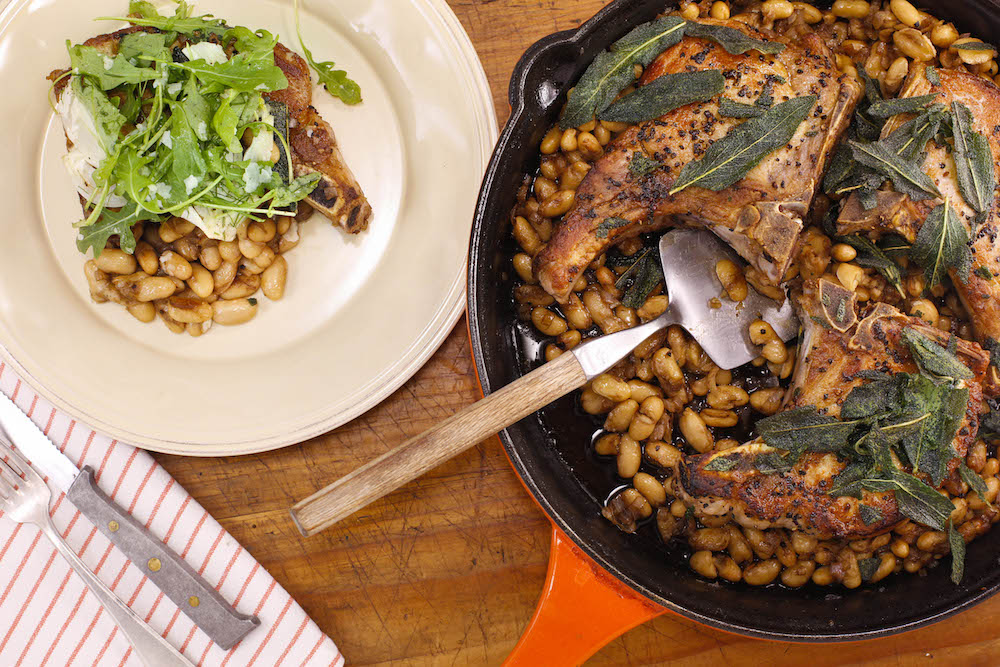 Heat a cast-iron skillet over medium-high. Season the chops with salt and pepper. Add a fat drizzle of oil to the pan and swirl to coat the bottom of the skillet. Cook the chops until browned on both sides then hold upright with tongs to brown the edges, 6-8 minutes total; transfer to a plate.

Reduce the heat under the skillet a bit then add the butter and let it melt. Add the sage and cook until the leaves are crispy and the butter browns, about 2 minutes. Transfer sage leaves to paper towels to drain then add the shallots and garlic to the brown butter and cook, stirring often, until aromatic, 1-2 minutes. Stir in the vinegar, then the stock. Add the beans; season to taste.

Return the chops to the skillet then transfer the skillet to the oven and roast chops 10-12 minutes, until an instant-read thermometer inserted horizontally into the chops registers 140°F.

While the chops roast, in a large bowl, toss the arugula, fennel and Parm shavings; dress with the lemon juice and olive oil, and season with salt.

To serve, arrange the chops on plates, top with the bean mixture and garnish with the fried sage leaves. Serve with the salad alongside.